I went, expecting to be developing high-budget training for the Petrochemicals industry. Another string to my bow, potentially lucrative and quite an adventure as well. Some of these things were even true.

By the time I arrived, the man who’d advertised for an Instructional Designer had left. The new manager didn’t really have a clue what it was that I did, and the bits of eLearning used in the company – and the LMS it ran on were a shambles. I set out to create a professional eLearning department.

This project – Life Critical Standards (LCS) – was everyone’s first week at Sadara. 5 days of classroom sessions delivered by Filipino trainers, ancient powerpoint slides filled with jargon that hardly anyone in the room could understand. This seemed to be a quick win – a great project to show what eLearning is for!

But starting from scratch – w 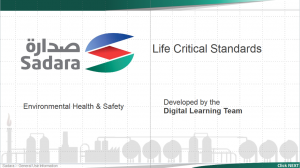 ell, there is a lot to think about before you even start. The whole corporate ‘Look and Feel’, the fonts, the menus. How sections should fit together. What the user needs to do to pass. ‘Quick win’ was a bit of an overambitious start! 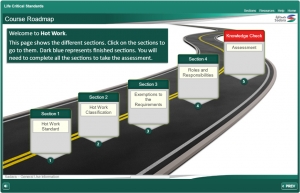 Seven sections – each starting with a Roadmap, each could be a learning unit on its own. All to be approved by the SME’s and management – which brought its own issues – like using female characters, for which I’d cultivated a good relationship with the Media department who officially approved it…

Above all, it had to be SIMPLE. Entertaining. Everyone working there, Arabs, Indians, Filipenos, you name it – they all needed to be able to ‘get it’. Not only read it, but follow all the interactions, know what to do on every slide. And what I’m doing is telling them a STORY. Everyone likes stories. That’s why we have presenters. And speech bubbles. And film elements… It’s wonderful what you can find on the internet, on our shoestring budget this eLearning punches well above its weight in getting the message across, here’s an example from the Hydroblasting section..

Finally, I want to show you… My favourite interaction in the course. It should be FUN. Believe me, in Saudi Arabia this blonde presenter raised a few eyebrows. People would go back and do this section again just for the hell of it! 🙂

And, well, that’s the short version of the story. I hope there’s enough to give you an impression. The whole project – 7 sections, around 600 slides, 7 tests. Created with and approved by Subject Matter Experts from DOW Chemical and Sadara. By the time I left, it had been used 4000 times, replacing 20,000 days of people sitting in a classroom instead of working. A saving to the organization of millions of dollars.