Working for PHM allowed me to direct a prestige project. For the first time I had a budget, a team to work with and a very demanding client! The Project consisted of three main Web-based Parts:

This was the first time that anyone outside Sweden had seen the much-anticipated new model. This clip is the first part of the Intro animation. It’s a slow reveal. The sky, with Northern Lights, reflects the car’s Swedish origins, and the buildings, scenes and mirrors reflect the simple minimalist design that Sweden is famous for.

Usability is a big issue in this course. The intended audience is car salespeople – not professional users of computers. The menus needed to be imaginative, engaging, and totally intuitive.

We spent time user testing with people who could hardly point a mouse – ensuring that they were able to find their way through without a guide.

The technical and safety features were all visualized in short films. Sliding reveals were used to give this section a racy feel. Voiceover gave a brief summary of the selling point, users then read on for details.

Sliding films in and out also allowed us to reduce the bandwidth needed.

Operating with a fraction of the budget, the videos that we produced were taken up by the Marketing team and released to the press – a valuable offshoot of our learning courses!

The final scene put the car in front of a 16:9 screen that is used to illustrate the marketing points. We developed personas for the target customers. They each talked about a characteristic of the car through a virtual social media site we created.

The second course covered the same material in greater depth. The full specifications were available, and we were able to work with media from the marketing department.  The intro animation was spectacular and carefully structured. It revisits the themes from the first course, and associates each target customer with the features most relevant to them. Each customer is given a quote that corresponds to the aspect of the car that most appeals to them.

The film introducing Part 2 begins with the car driving through a fantasy landscape, which features the characters and themes from the previous module. 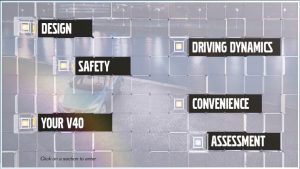 The Main Menu appears on a grid – 16 x9 blocks. Every screen in the course uses this grid as a basis – simplifying the layout and giving it consistency.

Each section finished with an original interaction.

The film resources available were fully integrated into the learning.

The V40 Variants course was to introduce the two special variants – The Cross Country and the R-Design. Each was given a range of characteristics and aimed at a particular segment of the target market. We initially developed personas to get closer to what the customer thought about, what they do for fun, what things are important to them – based around the specifications that we had been given about the cars. Our initial thoughts were to feature these personas as characters and tell a story about them.   We turned the camera round – Taking part of the Volvo branding “It’s You” – we told the story through the eyes of the driver. We used a scrapbook format to relate how each had an adventure, and how the car’s features had played a part in that adventure along the way.

Using this storytelling approach we were able to integrate images from the Volvo library with our own images and scenes.

This is a low-res example.  Using a combination of Final Cut pro and Captivate, we inserted text and learning messages into the footage that Volvo supplied us.

Every adventure has an end – and a change for our hero to reflect on all the things his car has done to make a success of the day. 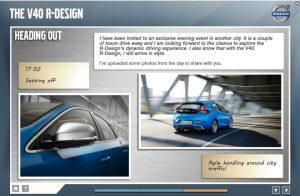 The R-Design owner is more interested in style – he wants an exclusive version of the car with a designer interior, more sporty styling. His (or her, we were never specific) adventure involves attending an event in another city – again, using the same notebook style.